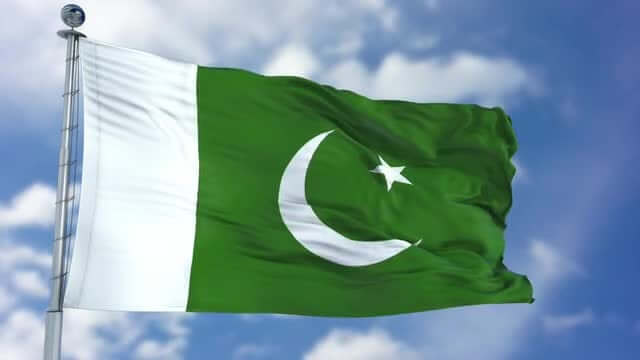 History of Pakistan – Nation in the NW part of the Indian subcontinent, bounded on the W and N by Afghanistan, on the NE by China, on the E and SE by India, on the S by the Arabian Sea, and on the SW by Iran. The many ethnic groups in the country are witness to the numerous peoples who have invaded the land over the centuries. Today the population is about 90 percent Muslim; and Urdu is the official language. Present Pakistan was part of British India from 1857 to 1947. Movements for freedom and for Muslim political rights in relation to the dominant Hindu population of India grew after the formation of the Muslim League in 1906. By 1930 there was increasing sentiment, led by the poet and statesman Muhammad Iqbal, for a separate Muslim nation. In 1940 Muhammad Ali Jinnah became the league leader and then the first head of the new nation when it received independence in 1947. The division of British India into the two nations, Pakistan and India, was marked by bloodshed in fighting between Muslims and Hindus and much hardship as hundreds of thousand s of people shifted their homes to be with fellow Muslims or Hindus. Pakistan at that time was in two sections, separated by approximately 1,000 miles of Indian territory. Present Pakistan was called West Pakistan; and the eastern section, now Bangladesh, was first known as East Bengal and then as East Pakistan. Karachi was Pakistan’s first capital. Pakistan and India went to war over the division of Kashmir in 1947–48 and again in 1965. 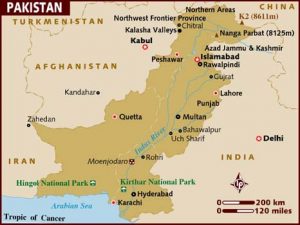 A boundary line was finally agreed on in December 1972. Dissatisfaction grew in East Pakistan, which felt the government favored the W, although most of the population was in the E. When East Pakistan won a majority in parliament in December 1970, the legislature was not allowed to meet and matters came to a head. In March 1971 East Pakistan declared its independence as Bangladesh. West Pakistan troops tried brutally to put down the revolt but were badly defeated by India when that nation entered the war in December. In August 1973, India and Pakistan reached an agreement on the release of Pakistani prisoners-of-war and the exchange of hostage populations in India, Pakistan, and Bangladesh. Pakistan recognized Bangladesh in February 1974, prior to the start of a world Islamic summit conference in Lahore. In the mid- 1970s the government of President Bhutto faced increasing regional tensions among Pakistan’s various ethnic groups. After the opposition parties challenged Bhutto’s 1977 election victory, widespread riots ensued. 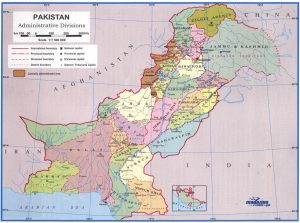 The unrest prompted the army chief of staff, General Mohammed Zia ul-Haq, to depose Bhutto in a military coup in July 1977, and declare martial law. Zia was declared president, and Bhutto, convicted of ordering the murder of political opponents, was hanged in April 1979. Tension on the Afghanistan border heightened in December 1979, when Russia invaded that country. In the early 1980s Pakistan received nearly 3 million refugees from Afghanistan and was a haven for anti-Soviet partisans. In 1985, Zia declared an end to martial law and installed himself as civilian president of Pakistan. In 1986, Bhutto’s daughter Benazir returned to the country as head of her father’s Pakistan Peoples Party. In 1988, Zia dissolved parliament and called for new elections. Zia died in a plane crash and Bhutto’s PPP won the election. Bhutto’s government was dismissed in 1990, replaced by a coalition government headed by Nawaz , who instituted economic reforms. In 1991, the parliament approve measures strengthening Islamic law. In 1993, the government again fell, and Bhutto’s PP, won the majority of seats and formed a government. In 1996 Bhutto was dismissed for corruption and Sharif again replaced her in 1997. In 1998 Pakistan tested its first nuclear device after an underground test by India. In the summer of 1999, conflict with India over Kashmir erupted again, with Pakistani– backed troops withdrawing from Indian-held territory after several weeks of fighting. 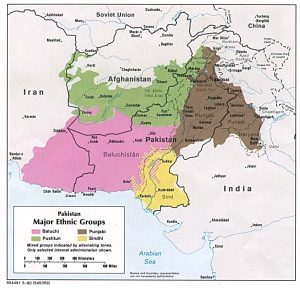 In October, 1999, a bloodless military coup led by General Pervez Musharraf ousted Sharif, suspended the constitution, and again declared martial law. Sharif was convicted of multiple crimes and exiled, and in 2001 Musharraf appointed himself president. Following the 9–11 terrorist attacks on the United States that were linked to Osama bin Laden, the United States ended its sanctions on Pakistan and sought its help in securing bin Laden from the Taliban government of Afghanistan. Pakistan permitted U.S. planes to cross its airspace and U.S. forces to be based there during the subsequent military attack on the Taliban in Afghanistan. In 2001 after a series of attacks on Indian cities by Pakistani based terror groups, India threatened war, but in 2002 Musharraf cracked down on terror groups. Elections in 2003 brought greater representation by anti-Western fundamentalist parties, and there were two assassination attempts on Musharraf. In 2004, there appeared evidence of the proliferation of Pakistani nuclear weapons technology to Iran, Libya, and North Korea by Dr. Abdul Qadeer Khan, the head of the Pakistani nuclear program. Khan, revered by many Pakistanis as the “father of the Islamic bomb,” was pardoned by President Musharraf. In 2005 a powerful earthquake devastated Kashmir and North West Frontier province.

Although Pakistan is nominally a republic, it has often been under martial law in recent years. Its relations with India, although improved, are still far from cordial. Islamabad, a completely new city begun in 1960, is the capital.

Top 3 Costs Travelers Leave Out When Making Their Travel Budget