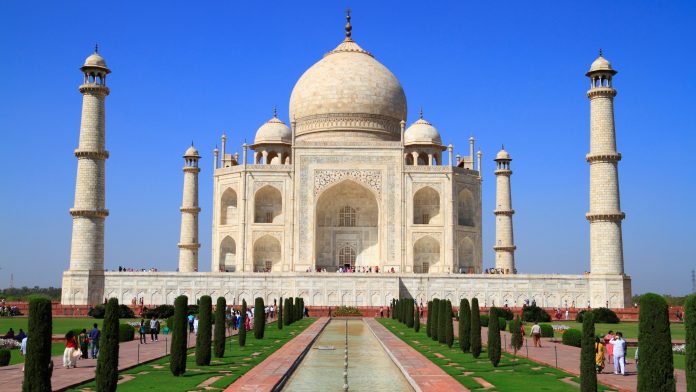 History of Taj Mahal – One of the greatest man-made creations, a place which yearly attracts millions of people from all the world is a magnificent and wonderful place of Taj Mahal is considered to be a real symbol of India.

Taj Mahal is an amazing whitewashed building which was built as a tomb for the emperor Shah Jahan’s, Mumtaz Majal, the third and most lovely wife that is located on the southern bank of Yamuna River in the Indian city of Agra. Despite his numerous harem, Mumtaz Majal was a woman he loved most of all. She gave birth to 13 children and died in 1631, when the 14th was born. The governor was grieving so much after his lovely wife’s death and that’s why he ordered to gather all the skilled craftsmen at that time for them to build mausoleum which would become a symbol of his love to Mumtaz. The construction was commissioned in 1632 and lasted for 20 years: the main part was finished in 1648 and the subsidiary buildings and the yard were completed five years later. The peculiar prototypes of this great tomb became Guri Amir, a Tamerlan’s mausoleum, the founder of the dynasty of the Mughal rulers, which is located in Samarkand and Shah Jahan’s own Jama Masjid in Delhi as well as Ilmad-Ud-Daulah’s Tomb which belongs to one of the Moghul rulers. 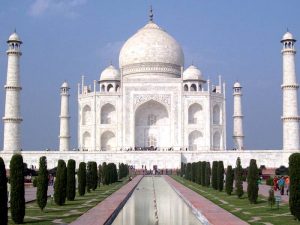 Taj Mahal is built according to the traditional Persian style and presents a complex of luxurious and gracious buildings that are made of white marble. The main part of this building belongs to the mausoleum located in the centre of the ground. The base structure is a large chambered cube with chamfered corners and is topped by a large dome. The structure stands on a square plinth with high minarets framing the four corners of the building. Mausoleum consists of many rooms and halls decorated with amazing mosaic which are painted in thin patterns and florid ornaments. One of these rooms keeps Mumtaz Mahal’s tomb. Next to her tomb there Shah Jahan’s tomb who wished to be buried next to his love. Originally the governor wanted to build the exact copy of the burial vault for himself on the other bank of the Yamuna River, but this time using the black marble, still he didn’t manage to bring his idea to life as he bequeathed to be buried in Taj Mahal together with his wife. It should be said that the both tombs are empty and the place where they were buried is located in the underground crypt.

Originally the mausoleum was decorated with big amount of precious and semi-precious stones, pearls and the entrance door was made of sterling silver. Unfortunately, only a small amount of the stones and decorations still remain, and the rest was robbed by unfair “tourists”. 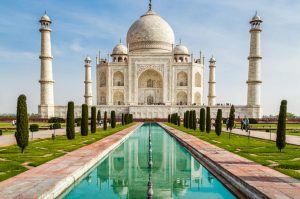 The beautiful garden is surrounded by three sides of the Taj Mahal and its gateway is also considered to be an architectural masterpiece. The pathways lead to the main entrance throughout the whole park and go along the wide channel. There are two mosques located on both sides of the mausoleum.

Rendering from the Persian “Taj Mahal” means “crown of palaces”. And it is really considered then to be the “pearl of the Muslim art in India and one of the masterpieces of the world heritage that is internationally recognized”. In 1983 it was designated a UNESCO World Heritage Site.

It is also worth mentioning that tourists are allowed to take photos of the Taj Mahal only from one side of the building i.e. the opposite side from the main entrance.