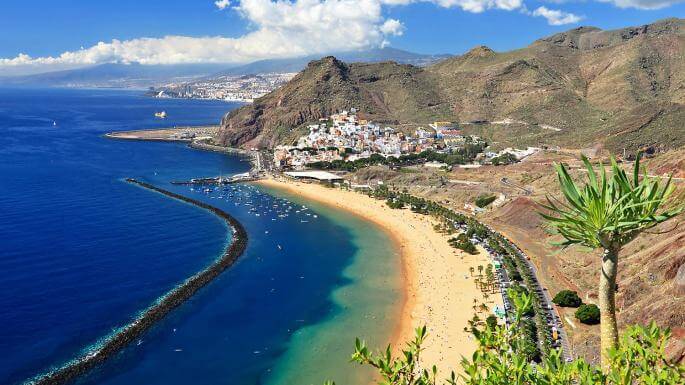 The archipelago under the Kingdom of Spain, in the Atlantic Ocean, off the north-western coast of Africa is known as Canary Islands or Canaries. Forming an autonomous community of Spain, the Canary Islands are located near Morocco, Cape Verde, and the Portuguese archipelagos of the Azores Islands and Madeira Islands.

The Canary Islands are mainly comprised of seven major islands including El Hierro, Fuerteventura, Gran Canaria, La Gomera, La Palma, Lanzarote, and Tenerife. These islands are the major tourist attractions of the Canaries. The Canaries also include minor islands of La Graciosa and Lobos.

Geographically, having volcanic origin, the Canaries are rugged and mountainous. Pico del Teide or Mt. Teide (Tenerife), 3718 metres above sea level, is the highest point on the Canary Islands and Spain as well. The Islands are famous for that arresting aureate beaches, spectacular lunar reminiscent volcanic landscapes, sunshiny climate, serene scenic beauty, and mesmeric ocean views.

The Canary Islands are one of the most coveted European tourist destinations. The islands are very popular for beach vacations. The major islands of the Canaries have well-developed communication systems, airports, and ports.

The Canary Islands are ideal destination for lovers of nature- eco-tourists. The islands are wonderful exoticas full of the beauties of nature. The World Tourism Organization in 1987 adjudged Lanzarote as six universal models of sustainable development, and UNESCO declared Lanzarote as a Reserve of the Biosphere in 1993. The islands have numerous fine hotels, bars & clubs. Lanzarote is famous for extremely vibrant nightlife. Tenerife is another beautiful destination of Canaries. Tenerife is famous for its sunny climate, beauties, beaches & bikinis, exotic sceneries, and vibrant nightlife. It’s very popular among British and German tourists, and particularly among the Spanish tourists, especially during Easter time.

• Area: 7,447 km² (1.5% of Spain)
• Population (2006): 1,995,833 (4.5% of Spain)
• Currency: Euro (€)
• Country: Spain
• Capital: Las Palmas de Gran Canaria and Santa Cruz de Tenerife
• Official Language: Spanish
• Time: Canarian time is Western European Time (WET) (or GMT; in summer one hour ahead of GMT). So Canarian time is one hour behind that of peninsular Spain and the same as that of the UK, Portugal and Ireland all year round.
• Passport/Visa Requirements: The Canary Islands are part of the border-free travel zone subject to the Schengen Agreement. EU passport holders can come and go as they please. Citizens of the USA, Australia, Canada, Japan and New Zealand may enter Netherlands as tourists without a visa and stay up to 90 days.

The Canary Islands are the tropical paradise of Spain. The climate of the Canaries can be mild and wet or very dry. The islands have a hot, tropical, sunny climate. March – June months offer sunny weather and hot mild climate. The weather towards the elevations is chilly. July & August is the hottest time of the year. January & February months are high humidity, windy, and often rainy.

Tenerife airports are is the most popular gateways to the Canary Islands. The airports are at about 2.5 hours flying time from Madrid, and about 3 hours from Barcelona. Located 5 kilometers from Arrecife, Lanzarote airport receives most of the flights from Germany, UK, Holland, Finland, and Scandinavia.