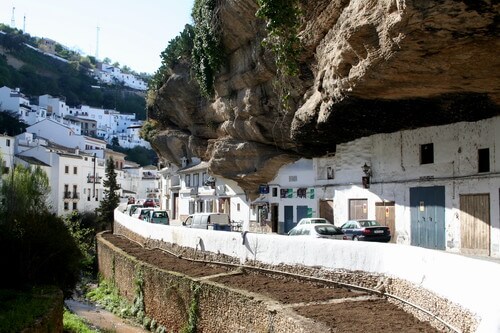 The Spanish city of Setenil de las Bodegas (The City in the Rock)- from those creations of human hands that very successfully could be entered in a surrounding landscape which for this purpose, apparently, was absolutely not adapted . Like such miracle as the city of Rocamodour in France and to the Portuguese Monsanto, this ancient Spanish small town very conveniently took place in a close environment of rocks.

Setenil de las Bodegas – the typical representative of В«white cities of AndalusiaВ» and at the same time, along with the village Huskar – one of the biggest exceptions in this row. The city with number of inhabitants less than three thousand is in the Province of Cadiz and its main sight – streets and the houses which literally entered in rocks or have hidden under them. 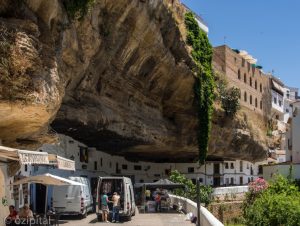 Rocks here, the truth, hang over a set of houses, creating feeling of unreality of all events. And a number of houses uses rocks as roofs, walls and as possibility to increase a living space at the expense of a gouging in rocky breed of new premises.

Houses caves, streets tunnels – Setenil de las Bodegas of eyelids from a century led the habitual life. In the Middle Ages bloody battles when in 1484 the city and the castle dominating over him were taken, at last, by army of king Ferdinand Aragonskogo, and Moors holding him were expelled. The next centuries in Setenil de las Bodegas in addition to olives and almonds developed the wine growing which has been safely destroyed in the 19th century by epidemic of a plant louse from which many vineyards of Europe at that time suffered. 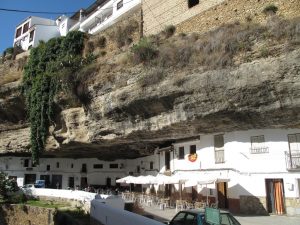 Today the city is known for the meat business, in particular, production popular in Spain and Portugal sausages. But more all of popularity to him was added by its unusual architecture in all senses – to look at this freakish sight of Spain there come guests literally from everywhere.