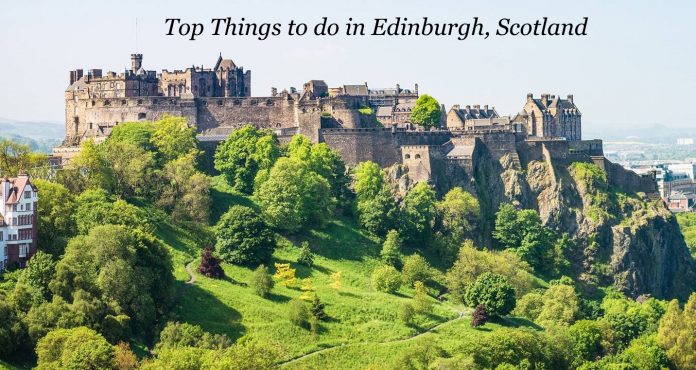 The capital of Scotland is already famous among-st travelers as a picturesque and charming city with historic weight underlying its contemporary life.

The first city to be crowned as UNESCO’s Creative Cities, this City of Literature is a cultural giant; hosting several dynamic events annually, including the internationally renowned Fringe Festival. With a lush green backdrop and the Edinburgh Castle looking over the entire city, it conjures up romantic images of the Middle Ages. Here, we introduce some of the top things to do in this vibrant city.

Nothing spells a good spooky experience quite like an underground labyrinth of hand carved passageways. The Gilmerton Cove is, to date, a complete puzzle to archaeologists and historians as to who constructed them, and for what purpose. Supposedly more than a century old, it was previously owned by a blacksmith, George Paterson, as a unique family residence. One of the theories spun was that he painstakingly and single-handily built the entire cave system over a period of five years, but that has been disputed due to the craftsmanship of the cave. The cove contains numerous apartments and stone furniture, with each room lit by skylight. Travelers can take the tour offered and explore this intriguing maze.

Enjoy the views at Arthur’s Seat

Located in the royal park of Holyrood Park, Arthur’s Seat is one of the finest specimens of Scotland’s beautiful wild landscape, with a distinctive shape reminiscent of a crouching lion. This hill provides a wonderful panoramic view of Edinburgh, and its gentle slopes make it easy for even novice or elderly travellers to go hillwalking on it and take in some fresh air. Travellers who want to work their legs more can go on one of the walk conducted in the park, which spans the striking Salisbury Crags, the ruins of St. Anthony Chapel and the charming Dunsapie Loch on top of Arthur’s Seat. Dunsapie Loch, one of the three lakes in the park, provides the idyllic ambience of a peaceful countryside, which is a wonderful break from the hustle and bustle of the city.

Visit the National Museum of Scotland

One of the rare museums in the world to house such a diverse amount of collections and galleries, the National Museum of Scotland is a comprehensive labour of love to Scotland’s unique culture and history as well as international science and other invaluable genres of knowledge. It is a combination of the Museum of Scotland and the Royal Museum, with the two buildings just adjacent to each other and interconnected. Containing around 8000 objects and eight galleries, some of the highlights include the famous taxidermied Dolly the Sheep, the Ancient Egypt mummy mask and the life-size cast of a T-rex. Travelers can even try on 16th or 18th century outfits to get a better idea of how it was like in the past! The icon of Edinburgh, this lofty, instantly recognizable castle is definitely worth a visit. Part of both the New and Old Town of Edinburgh, this monument has been occupied by humans since as early as 900 BC. In the Middle Ages, it was Scotland’s principal royal castle, containing the crown jewels of Scotland and its officials state records. Today, visitors can listen out for the 1 o’clock gun fired almost every day without fail from this fortress, a tradition which started as a signal for ships in the 1800s. Highlights include the dazzling crown jewels, also known as the Honours of Scotland; the Stone of destiny, Scotland’s coronation seat; and the beautifully decorated Great Hall. Edinburgh Castle also offers a beautiful view of the city.

A UNESCO World Heritage Site, this historic section of the city is worth an afternoon’s exploration. Travelers can take in the many Reformation era architecture and its distinctive medieval layout. There are many attractions to view here, including the Abbey and Palace of Holyroodhouse, the royal residence of Mary Queen of Scots. A trip to Victoria Street is great for some souvenir shopping, and the pubs along the Royal Mile are great for mingling with the locals or doing some people-watching.